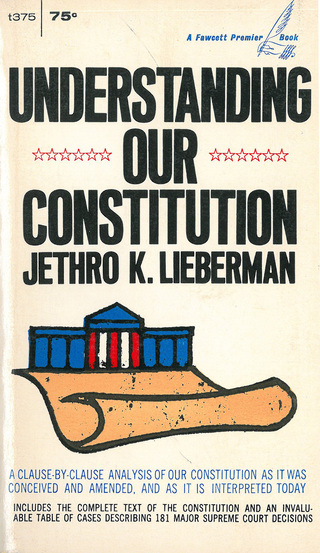 My first foray into writing about the Constitution and constitutional law. I wrote it while in law school, after taking the required two-semester course in constitutional law from Paul Freund. The experience in writing it and some of the critiques when published led me eventually to understand that a clause-by-clause analysis of the Constitution is not the best way to explain and explore constitutional issues, though all books at the time, I think, did so. The problem was on my mind for a long time and a quarter of a century later I landed on the topical approach of The Evolving Constitution and its sequels. This was the first of five books for which Edward L. Burlingame served as my editor. It was also my first book to find its way into a paperback edition.

"Mr. Lieberman is interested in showing how the Federal system operates today and how the Constitution is interpreted today. To that end, he presents and analyzes the constitution and Amendments remarking particular circumstances and cases which have altered it as well as the principles on which they were written. His theme is law and liberty, that dictated by the Constitution itself (as its organization). It is an intelligent, sound middle course approach."