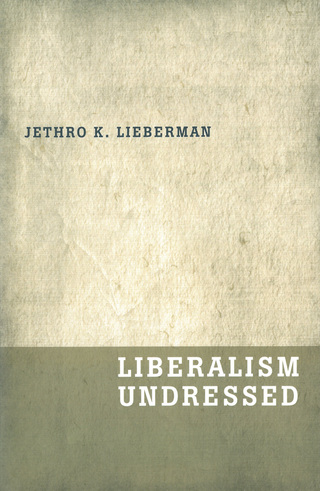 The fundamental human dilemma is how to escape from the jungle without landing in the zoo.

From the jacket flap

One of mankind's most enduring questions is the legitimate scope of state power: how far and in what ways may the government meddle with people's lives? Where lies the line that government ought not cross? For more than three centuries, the western world has answered these questions with institutions and practices that collectively have come to be known as liberal democracy. Though deeply rooted, liberalism has stirred severe attacks from both the left and the right and it has never wholly won the day. During the past 40 years, many of liberalism's most distinguished defenders have presented complex, controversial, abstruse, and even impenetrable theories to justify liberal institutions and practices, often relying on metaphysical constructs, imaginary beings, and fanciful events to fashion abstract liberal principles that rarely reach real-world problems. Liberalism Undressed returns to liberalism's roots to explain, in accessible and readable prose, why liberalism retains its power and appeal. Building on John Stuart Mill's well-known but rarely analyzed Harm Principle, this book undertakes to demonstrate a liberalism that can justify a government robust enough to deal with pressing modern problems of human harm and suffering while restrained enough to provide people freedom to live life on their own terms. A searching reinterpretation of liberalism's foundations, Liberalism Undressed asks us to rethink our understanding of the meaning of harm and the proper role of government in our individual and communal lives.

"Liberalism Undressed is Lieberman's masterwork, a brilliant, provocative and mature product of decades of thought about some of the most fundamental issues of our time or any time. The book catapults Lieberman to the first rank of modern political and legal philosophers. . . . Lieberman writes lucidly and with verve."

"In Liberalism Undressed, a book deeply immersed in the political and legal thought of the last several centuries, Jethro Lieberman revives to powerful effect JS Mill's largely ignored 'harm principle.' With great clarity, elegance, wit, and a good deal of common sense, Lieberman demonstrates that we can find in Mill's principle a justification for liberal government. By addressing a wide range of public policy issues with the harm principle in hand, he derives a potent theory of state powers. Fearless in his rejection of the arguments of a multitude of contemporary pundits and theorists, Lieberman offers the reader a humane guide that should enable us to preserve the liberty of liberalism in a world of necessary interdependence and government involvement."

"Jethro Lieberman has, for many years, been one of our most accomplished and thoughtful commentators on the law. He brings to legal, political, and cultural analysis the acumen of a philosopher, the common-sense wisdom of a practitioner, and the flair of a literary stylist. In an age when 'liberal' has become an epithet, Lieberman brilliantly reformulates and recaptures the kind of liberalism that Edmund Burke articulated two centuries ago, and that even conservatives like me can cherish."

Notes on origin and writing

This book demonstrates the triumph of perseverance over procrastination. I began it in 1972 when I was awarded a Phi Beta Kappa Bicentennial Fellowship to undertake a project then called "Private Goes Public." Oxford University Press bought the book in 1973 but backed out when the first draft arrived a year or two later (no doubt making this book one of the very few that Oxford ever contracted for twice, separated by a span of nearly four decades). During its 40-year gestation, this book was written and rewritten wholesale four times, and overhauled a fifth, with additional, though more minor, retail revisions thereafter. If this book were computer software, it might be subtitled v.4.67. Work on the book also prompted me to upend my life for several years to pursue a Ph.D. at Columbia (how else was I going to really learn what I was writing about?), while working full time and writing still other books. When it was published, my grandchildren were older than my children were when I first started to write it.