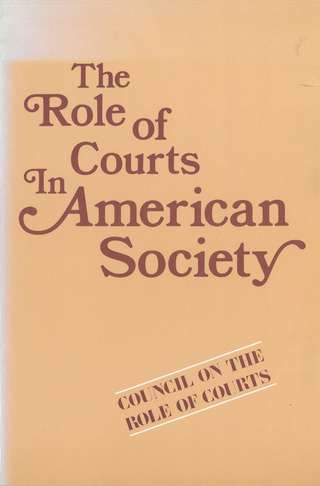 Principal editor for the Council on the Role of Courts, West Publishing Co., 1984, 171pp.

The Council on the Role of Courts was the brainchild of Daniel J. Meador, then assistant attorney general of the United States and head of the Office for Improvements in the Administration of Justice. In 1978, he established a working group of some 30 lawyers, judges, and scholars to "convene a Task Force that over the ensuing years would commission a number of scholarly studies designed to help the group delineate the proper role of the courts in American society." The Council funded several studies and hosted many meetings between 1979 and 1982, when it convened a National Conference in St. Louis attended by 115 prominent lawyers, scholars, and judges to critique the draft report, after which this final report was produced and published two years later. My job was to stitch together a number of the existing reports, to draft portions not directly covered by the reports, and then to edit the whole after the National Conference, subject to intensive discussions by the report committee.
The Report Committee consisted of Professor Maurice Rosenberg of Columbia Law School, chair; and members Jane Frank Harman (then in private practice and later a Congresswoman from California), Joel B. Grossman (professor of political science at Johns Hopkins), Benjamin Kaplan (my former teacher and later a justice on the Massachusetts Supreme Court), and Antonin Scalia (who when I began work with the Council in 1982 was just leaving the University of Chicago Law School to become a judge on the U.S. Court of Appeals for the District of Columbia Circuit; four years later he was appointed to the Supreme Court).