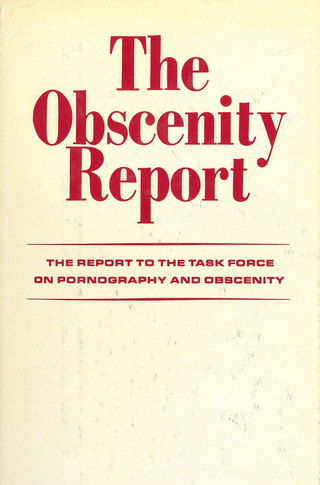 A spoof, both of government reports generally and of the argument at the height of the Warren Court's liberalization of obscenity laws that America was in mortal danger if pornographic material was allowed to spread. It was the first of two books that Sandy Frankel and I wrote together. As I recall it more than 40 years later, this one was inspired by the revelation that the 1969 best seller Naked Came the Stranger was a hoax and that its purported author, Penelope Ashe, was really a collection of 24 Newsday reporters. We thought we could capitalize on the spirit of the times and have a lot of fun while doing it. When we first began, it was to be a story of a hypothetical federal pornography agency — completely fanciful, for who could imagine such a thing? — only to discover, as we were in the middle of it all, that there actually was such a beast. (It was an early lesson in understanding that truth is always stranger than fiction.) So we wrote the agency report, instead. The publisher convinced us that we ought to proffer it as a draft report of the agency staff, rather than the actual report of the task force itself. We thought the satire was so broad that no one would really be fooled — even the index was comedic. But several reviewers fell for it, presumably because they didn't look closely at all.

"I was relatively sure the book was a joke, and by the time I reached page 32, all suspicions were confirmed by this sentence . . . 'The country should view with distress the disturbing tendency of religious greeting cards to expose areas of cherubim's bodies which are best left private.' . . . The book is beautifully done, written in a style calculated to make Middle America nod in agreement and liberals writhe in horror. . . . The cream of the humor, however, does not lie in the book but in the reader's reaction to it. Every snort or snarl, of anger or agreement, is the hunting call of the sucker making a fool of himself. Human beings have a habit of doing that with reasonable frequency, and the authors of the 'Report' are to be commended for bringing the fact once again to our attention."
Joseph H. Mazo, Women's Wear Daily