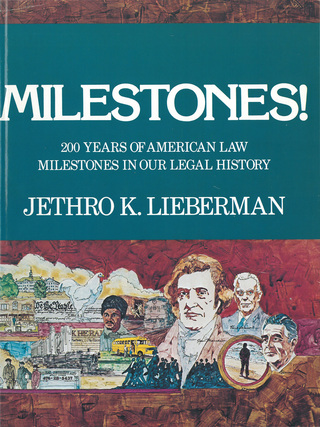 The stories behind twenty milestones of American legal history, including Marbury v. Madison, Dred Scott v. Sandford, Brown v. Board of Education, Miranda v. Arizona, and United States v. Nixon. The milestones selected for inclusion were the top vote getters in a 1974 poll conducted by the American Bar Association, in preparation for the bicentennial celebration in 1976. West produced two editions, both lavishly illustrated coffee-table sized books, sold through its own channels, and Oxford produced a similar trade edition. Several reviewers noted that some of the choices were odd and probably wouldn't stand the test of time; I agreed then and I agree almost 40 years later, but these were the selections I was handed. Some reviewers objected that it was not a general legal history. True, but it was not meant to be.

"Milestones provides brief histories of 14 significant Supreme Court cases. Lieberman is a skilled writer who understands the peculiar contradictions in American culture, including the penchant for lawlessness and civil disobedience in a society based on a system of law."

"What recommends Milestones and justifies publication is the concern with other than sterling heroes and great battles fought and won. . . . It confronts big subjects; and it is lucid and simple without being reductive or compromising. The general reader, for whom it is admittedly written, will find it most instructive."