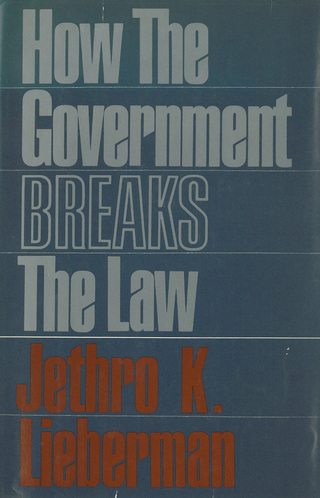 Cover of the Stein and Day hardcover edition

How the Government Breaks the Law

A study of government lawlessness — of "official lawbreaking" — published just as Watergate was beginning to unfold, with case studies illustrating the many ways governments from the village level to the courts, Congress, and the White House duck, ignore, and defy the laws that it is their duty to enforce and uphold.

Chapter 1: A Healthy Contempt for the Law
Let's put crime in perspective and openly admit that we couldn't get along in America unless we were all willing to break the law. Despite gloomy ruminations over the sorry state of things in this most apocalyptic of centuries, we Americans do remain steadfastly cheerful about at least one thing — the life of crime. That unremitting moralist, Senator Strom Thurmond, spoke for every American when he tongue-lashed a policeman who was dimwitted enough to attempt to arrest him for running a red light. Senator Thurmond did not deny the crime; he merely remind the officer that a Senator cannot constitutionally be arrested for committing traffic violations when the Senate is in session. "He didn't understand the system," the Senator later complained of the hapless cop.

Publishers Weekly
"The author argues that the wide disregard of law in this country originates with the government itself, which habitually distorts or disregards the laws it exists to implement. He produces a persuasive number of infuriating examples of governmental lawlessness and eventually points out what the reader has long since noticed – there is no such creature as 'the government.' There is merely an infinity of persons in official positions where their prejudices, lazinesses, and private ambitions function with a minimum of supervision and restraint."
Phoebe Lou Adams, The Atlantic Monthly
"Reveals something that Americans are becoming more and more conscious of: the biggest lawbreaker in the United States is not an ordinary citizen, but government itself. . . . The reader will find the book well documented, nonpartisan and clearheaded, and it not only uncovers enough evidence to convict the guilty, but also points the way toward sensible remedies."
Richmond Times-Dispatch
"In what is, to the best of our knowledge, the most extensive study on the subject, Lieberman . . . describes and illustrates with contemporary case studies the startling dimensions of government criminality. . . . [His] context is legalistic, his style forthright, his tone Naderesque."
Kirkus Service
"In compelling, often dramatic fashion [the book] documents the illegal exercise of power by bureaucracies large and small. It should be required reading in this election year when the issue of law and order promises to be, once again, a major issue."
Senator William Proxmire